The Discovery Channel commenced it's 25th year of the ever popular Shark Week last night, and Universal is releasing the original Jaws on Blu-Ray tomorrow, so there is no better time than today to compile a top ten list of the greatest shark attacks in cinema history.

Watch the videos and vote for your favorite in the poll at the bottom! 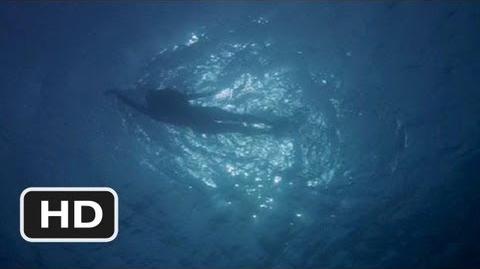 It's amazing that Spielberg was able to scare us so much in this classic Jaws scene without even showing the shark. As effective as that technique was throughout the film, it wasn't the director's original plan. Watch this video to learn how Spielberg was forced to pull a "Hitchock" when the electronic shark model wouldn't operate in salt water! 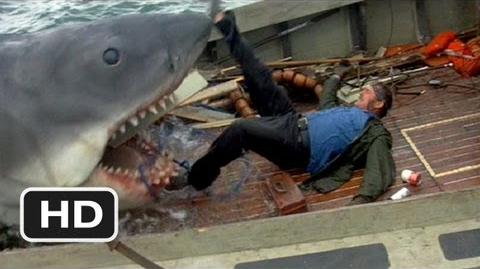 In this scene from Jaws, we actually get to see the beast and his 3,000 pearly whites. We also get to see a man devoured whole as he gargles up blood. The strategy of this attack is simple, but brilliant, as the shark uses his mass to tilt the boat and send a guy sliding down into his mouth. If you don't think this is a great attack, you're gonna need a bigger brain. 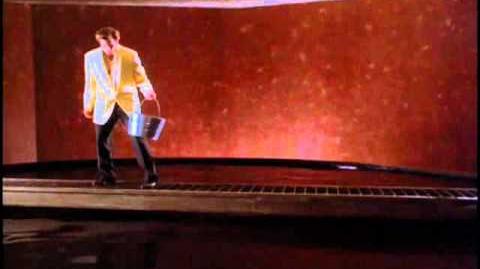 It's a comedy, so nobody gets hurt and there isn't a drop of blood, but when the shark makes his brief appearance, it's shockingly realistic and actually quite startling. Even when they knew it was coming, 90's kids were crapping their pants during this scene. The classic Jim Carrey bit was also the first shark attack in cinema history to be intentionally humorous.

Megalodon Swallows a Jerk, a Raft Full of People, and a Jet Ski

What this scene lacks in special effects it totally makes up for in gut-busting preposterousness. I can't decide which of the three kills is better, but I'm strongly leaning towards the third, when the old man drives a jet ski directly into the shark's mouth, making zero attempts to either stop, turn, or simply bail.

Mega Shark Bites an Airplane Out of the Sky

I don't think it's a stretch that this clip is labelled on YouTube as "The greatest movie scene ever?" because it's certainly in the running. It's a reminder that some people get paid to sit around and come up with ideas like, "let's have the mega shark jump out of the water and devour a commercial airliner." On a scale of epic-ness, this is certainly the most grandiose of the attacks.

Note to scientists: when making a motivational speech to your crew about how you're going to evade highly-evolved, man-eating "smart sharks", DO NOT stand next to the water, even if it's just a small opening. How does Samuel L. Jackson get these parts anyway? Does he purposefully seek out the most ridiculous roles, or are the roles written specifically for him?

Joey Fattone's Performance is Interrupted Before it Begins

It may be a cheap, made-for-TV movie, but it must be praised for allowing us to savor the gruesome deaths of fist-pumping, orange-colored Guidos and Guidettes who somehow became pop-culture phenomenons in recent years. Anytime a former boy band member gets eaten by a shark right before he's about to start singing is a flawless cinematic victory.

Who would have thought that in the first ever Batman movie, our hero would have to fend off a shark attack? It's a good thing he brought his shark repellent spray, and it's convenient that Robin is flexible enough to do a backbend so Batman can reach said repellent. Why does the shark explode? Because Batman, that's why. 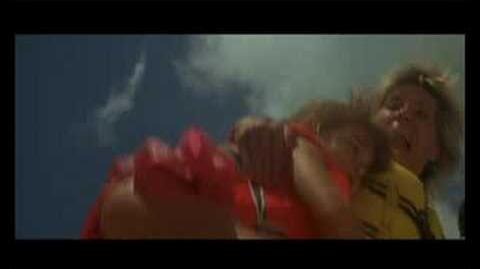 So maybe Jaws: The Revenge was the worst of the Jaws sequels, but at least they meshed a slow-motion banana boat attack with some of the finest female shrieks we've ever heard. I have no idea what those three ladies are yelling, but it's hilarious. You'd think this scene would deter people from sitting in the back seat of a banana boat, but those things are so awesome I'll take whatever seat I can get.

From the same people who brought you Mega Shark vs. Giant Octopus comes another shark film starring Carmen Electra, Jerry O'Connell's brother, Hulk Hogan's daughter, and a shark with 2 heads. Clearly their budget is getting bigger. Every shark attack in this movie is so absurd that I had to group them together, but shout out to the part where the pair of water skiers get gobbled up!