Marge was one of Michael's teenage friends and the shark's seventh victim in the film Jaws 2.

She gave her life to save Sean, whom she took a liking to when they first met.

She was played by Martha Swatek.

After seeing Sean Brody accidentally knock over a bucket, she sneaks up on him and invites him to join her on her boat.

She is very playful and loving towards Sean when they first meet, but when they and the rest of the kids are attacked by a shark, Marge takes it upon herself to protect Sean, and she does so with great courage and responsibility.

Later, her boat is knocked overboard by the shark, and both Marge and Sean fall into the water. Once it had been capsized, Marge got onto the boat, lifting Sean onto it. The shark rammed it violently, probably marking that he would kill Marge next time he attacked.

After Marge grabs Sean and swims back to the boat with him when they reach an overturned sailboat and Sean climbs the ropes on the boat, reaching the top safely. Before Sean makes it on to the boat when he is using the rope to climb up Marge Sean to "Hury!". The shark decides to leave for a few seconds and Marge desperately tries to get back onto the boat. Panicking, she says to Sean, "Will you pull me? I can't get up!" She manages to partially, but slides back into the water. Sean grabs her gloved hand, trying in vain to pull her up.

The shark immediately approaches into view, and breaches, devouring Marge. This is viewed entirely from behind, and she is dragged to her death in a pool of blood. Sean gives a terrified scream as the shark disappears into the water with Marge, while Jackie Peters, another teenager, screams in horror nearby.

Marge likes adventure; this is shown when she decides to sail on the sea with her friends.

She shows her selflessness and bravery when she gives her life to save Sean from the Great White Shark that attacks them.

Marge also likes to tease and joke around. This is shown when she walks over to Michael's boat and grabs Sean.

She wore a blue hat (which got lost during the first shark attack), a navy-blue shirt with a white v-shaped collar, olive-green sailing gloves, blue sailor pants, and brown sandals.

Marge was kind towards Sean her kindness is shown when she tells Sean that he can ride in her boat.

Marge cared for Sean, and was shown to playful with the young boy, she shows this behavior when she walks up behind him and grabs him as he was arguing with his older brother Michael.

Marge gave Sean more attention than his brother Michael did during their time together. After the shark attacks, Marge becomes very protective of Sean, showing that she was determined not to let anything happen to him.

Marge comforts Sean by holding him when the shark attacks their boats. Aside from Marge's playful and protective attitude for Sean. Marge is also very flirty with him as well.

Marge hugging Sean while playfully teasing with the boys and Sean.

Marge tries to avoid the shark

Marge pulling Sean out of the water

The shark threatens Marge and Sean

Marge and Sean watch the shark swim past them

Marge given a rope

Marge and everyone else happy that help has arrived

Marge and Sean ready to go

Marge and everyone else in trouble

Marge ambushed by the shark

Marge shocked to see Sean having fallen into the water

The shark ravenously watches Marge and Sean from below

Marge trying to climb on the sailboat, just before she meets her end.

Sean trying to help Marge up

The shark goes for Marge

Marge being eaten by the shark 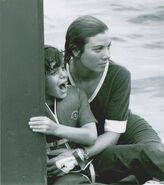 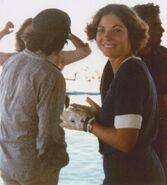 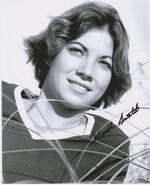