Jaws Unleashed is a 2006 action video game inspired by the 1975 motion picture, Jaws. It was developed by Appaloosa Interactive (developer of the popular Ecco the Dolphin series) and released by Majesco. Like the Grand Theft Auto series, the game features open-world gameplay, with the player being able to roam freely throughout the water, feeding on other animals and even on humans; all the while destroying everything in its path. Jaws Unleashed was released for Microsoft Windows, Xbox and PlayStation 2.

Amity Island is growing, making corporate connections with prestigious companies like Environplus to improve the Island's economy. Unfortunately, the increased population around the Island and recent industrial activity has also attracted one of Earth's most fearsome creatures and the game's main character: Jaws, an enormous great white shark. When the Environplus CEO's son is eaten by the ferocious beast, the CEO hires renowned shark hunter Cruz Raddock to track and kill it. Meanwhile, Marine Biologist Michael Brody tries to capture the shark for research.

In Jaws: Unleashed, the player assumes the role of the shark Jaws himself. The shark first enters the island from the southern end and the player finds itself in a cove. The cove has tutorials to allow the player to become familiar with the controls, such as the ones for moving the shark and attacking other creatures. The shark has a menu for upgrades as well. These can be accessed from either the main menu or the pause menu. Upgrade points are earned by causing destruction around Amity Island (in levels and in free-roam mode), completing levels, and/or collecting bonus items, the most frequently found of which being treasure chests. There are numerous upgrade criteria to choose from. Players can choose to upgrade the shark's power, speed, hunger, health, or accuracy. During gameplay, there is a HUD in the lower-right corner of the screen. This HUD has four meters and a sonar that informs players of the positions of important objects, prey, and enemies. The two parallel meters above the sonar are for Jaws' health (right side, red-colored), and hunger (left side, green-colored). As Jaws becomes hungry, its health will diminish, forcing the player to "eat" constantly. The health bar will also diminish as Jaws takes damage. The last two meters are used to charge the shark's tail-whip and head-butt attacks. The more each meter fills, the stronger the attack is. The meters are on the left quadrant of the sonar, running along the arc with the head-butt meter on the outside and the tail-whip meter on the inside. The head-butt meter is orange when charging, flashing when fully charged, and is the same with the tail-whip meter, but it is purple instead of orange. Jaws has unique attacks in its arsenal. The shark can ram objects with its snout, whip others with its caudal tail, bite, and when the player earns enough points to upgrade Jaws' abilities, new attacks become unlocked, such as the "corkscrew" and the "body bomb." To perform a corkscrew attack, charge up the head-butt meter and tail-whip meter; head-butt first, then release the tail-whip button and the shark will spin around, causing damage to anything caught in its wake. To perform a body-bomb, simply charge the head-butt meter, point the shark upward, release movement button and the shark will fly up in the air, and smash back down. 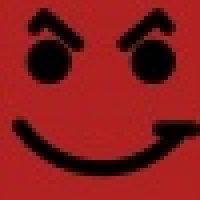