Jaws is a theme park attraction based upon the films of the same name. The attraction places guests aboard tour boats for what should be a leisurely tour of Amity Harbor, but instead becomes a harrowing chase between the craft and a very determined great white shark. Jaws is an expanded version of a famous scene on the long-running backlot tour at Universal Studios Hollywood, also inspired by the film, and can be found at Universal Studios Japan near Osaka, and formerly, at Universal Studios Florida in Orlando.

Following the opening of Jaws with the park on June 7, 1990, it experienced extensive and persistent breakdowns as a result of the elaborate special effects involved, as did fellow original rides Kongfrontation and Earthquake: The Big One. However, while Universal was able to eventually contain the technical bugs in the Kong and Earthquake rides at "utmost consistency", the effects in the Jaws ride constantly refused to work at all, resulting in the ride having to be evacuated almost daily. Following the Summer opening of the park, Universal temporarily shut down the ride in August 1990, and sued Ride & Show Engineering, Inc. for failing to properly design the ride. Throughout 1991 and early 1992, Universal attempted to refurbish the effects of the ride for an eventual re-opening, but with no success. Some reports leaked that the high-tech electronics used in the sharks was damaged due to inadequate waterproofing.

Eventually, Universal collaborated with Totally Fun Company, ITEC Entertainment, Intamin and Oceaneering International, who together installed an entirely new ride system and special effects to create an almost entirely new version of the ride. Some of the changes, which resulted in a re-design of the ride, included the replacement of two major ride scenes; the first being where Jaws bit onto the tour boat and turned it by 180-degrees (which was replaced with a Gas dock explosion scene); and the second being the finale, which was originally loosely based on the first Jaws where the skipper shot a grenade into the shark's mouth causing it to explode underwater (which was replaced by a finale loosely based on the ending for Jaws 2 where the shark was electrocuted after biting onto an underwater cable attached to a high-voltage barge). Oceaneering provided the animatronic shark for the redesigned ride, their first theme park-based project. The ride was then officially re-opened by Roy Scheider, Lorraine Gary and Steven Spielberg in Spring of 1993.

On March 31, 2001, Jaws officially opened at Universal Studios Japan. The ride system for the attraction was developed by MTS Systems Corporation.

Following the hurricanes that struck Central Florida in 2004, Universal was forced to temporarily close the ride in January 2005 due to the rising cost of petroleum, which was used to fuel the numerous pyrotechnical effects throughout the attraction, as well as the tour boats. The ride finally reopened in December 2005, but was listed as "seasonal" and only open on busier days. This lasted until February 2007 when the ride was finally opened full-time again after numerous guest complaints. During the 2005 closure, several renovations were made to the ride. The attraction was further refurbished every year from 2008-2011.

On December 2, 2011, Universal Orlando Resort announced that the Jaws attraction along with the entire Amity area of Universal Studios Florida would close permanently on January 2, 2012 to "make room for an exciting, NEW, experience." The attraction officially closed on January 2, 2012 at 9:00 pm with Michael Skipper aka "Skip" giving the final voyage to the last lucky group of 48 guests. By the next morning, the entire Amity area was walled off and completely demolished in the following months. The hanging shark statue from the town square remains as a tribute to the ride and can be found in the Fisherman's Wharf area of the San Francisco section of the park. The attraction remains open at Universal Studios Japan.

After the shark, nicknamed as Jaws, was eventually destroyed by Chief Brody, Matt Hooper and Quint in 1974, Brody became a legend in Amity Harbor, and the "Jaws" incident inspired Steven Spielberg's big Hollywood movie. However, the tourism on Amity Island strongly decreased following the incident due to fear of sharks. However, resident seaman Jake Grundy decided to open a new boat tour on the island which would take guests out to the historic areas where the shark attacks actually occurred, which ultimately brought back tourism to the island.

As guests enter Captain Jake's Amity Boat Tours, they walk through a series of boathouses located near Amity Harbor, which hold various fishing supplies, nautical artifacts and feature numerous overhead television monitors that are tuned to Amity's local TV station, WJWS13: The Station That BITES (which also has the tagline The station that plays the hits). The station features a low-budget local talk show entitled "Hey There, Amity!", children's and news programming, ads for local businesses, and promos for classic movies and television shows, many of them from the Universal library. Upon reaching the end of the queue, guests are loaded onto one of Captain Jake's tour boats.

After boarding the tour boat, guests learn that they are taking a guided scenic cruise to visit the actual locations of the shark attacks that occurred during that fateful summer of 1974, which were made famous in a big Hollywood movie that was made not long afterwards. The tour boat is piloted by one of Captain Jake's skippers, and is protected by an army surplus 40 mm grenade launcher. However, guests are reassured by their skipper that they won't need to use it because the last time anyone had seen a great white shark in the area was back in 1974.

The tour begins in Amity Harbor as the tour boat passes the homes of Chief Brody, Mayor Larry Vaughn and various harborside businesses. As the tour boat approaches a lighthouse situated on top of a rocky jetty, the tour is suddenly interrupted by a radio distress call from a fellow tour boat skipper named Gordon. His call for help degenerates into screams of terror, followed by an eerie silence. As the skipper contacts the home base in an attempt to figure out what is going on with Gordon's boat, the tour boat rounds the jetty to reveal the remains of Gordon's tour boat, Amity 3, sinking into the murky waters of Amity Harbor.

Suddenly, a dorsal fin rises out of the water, the fin of what appears to be a Great white shark. The fin submerges and passes beneath the tour boat, rocking it back and forth. In a panic, the skipper pulls out the grenade launcher as the dorsal fin rises out of the water on the opposite side of the tour boat. Not realizing that it is actually loaded, the skipper fires at the shark, but misses it entirely. They try firing a second shot, but miss again as the fin sinks back beneath the surface of the water.

As a last resort, the skipper decides to unload everyone at an old fishing pier that happens to be located near a high voltage barge. But just as they reach the pier, the shark's fin reappears heading straight for the tour boat. Suddenly, the shark emerges right next to the tour boat but manages to grab and bite down onto a submerged power cable from the barge and electrocutes itself. The smell of roasted shark fills the air as the shark disappears into a cloud of steam that engulfs the tour boat. As the steam cloud dissipates, the charred corpse of the shark resurfaces and makes one final lunge at the tour boat. But the skipper quickly takes one last shot at it with the grenade launcher and finally hits it, destroying the shark and restoring the tranquility of Amity Island.

Jaws then permanently closed in 2012 and was replaced with Diagon Alley for The Wizarding World of Harry Potter. 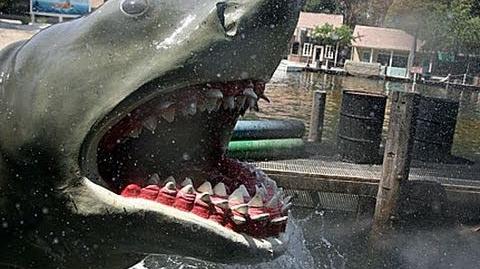