Chrissie Watkins was the first reported shark victim of many that were attacked by a rogue Great White Shark during the infamous Amity Incident. Her death is the most famous and well-known scene in the Jaws franchise.

The attack on Chrissie Watkins, who was visiting the island of Amity for summer break, occurred off the islands' south beach during the summer of 1974. It occurred whilst she was skinny dipping. The shark (Bruce) grabbed her legs, and proceeded to drag her around. Chrissie tried desperately to save herself by grabbing onto a buoy, but she was swiftly dragged under the water and eaten.

Chrissie's remains later washed ashore and were discovered by Deputy Leonard Hendriks of the APD.

Her appearance is almost the same but her death is in more gruesome detail. Also, there is a sex scene. The novelization also elaborated slightly on her character, namely that Chrissie's first name was Christine, and that she had been a drifter who hitchhiked from Idaho over to Amity Island, and as such won't be missed due to lacking any close friends or family. 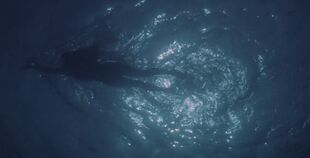 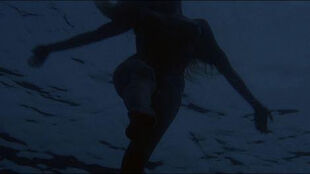