Bruce is the name of the Great White Shark who appears as the main antagonist of the first Jaws film, and was the collective name for a reoccurring group of overgrown Great White Sharks thought to be closely related genetically, however neither the film nor the novel ever refers to any of the sharks by a particular name. The name Bruce originating from the name given to the original animatronics by Steven Spielberg.

This particular incarnation of the shark was depicted in the film Jaws released by Universal in 1975. In addition, there were slightly similar-looking designed sharks depicted in follow-up sequels (J2, J3, and J4, respectively). However, the shark design as depicted in Jaws, is by far the most respected variant among aficionados of the film franchise.

The shark was originally called "Bruce" by film crew members in reference to Steven Spielberg's lawyer, Bruce Raynor, knowledgeable fin fans tend to prefer using this as an official moniker. Interestingly, it has never been agreed upon as to the official name the shark should be called. Casual fans of the film franchise in general tend to call the shark JAWS, which is actually something of a misnomer, considering that there were different sizes and shapes of sharks featured in each of the four films in the franchise.

A hollow, static copy of "Bruce" from the film was discovered in a junkyard years later, and is in essence a fourth "Bruce" pulled from molds for the mechanical shark used in the production of the film. Serious fans of the film have christened this rare find, "Junkyard Bruce" or in

'Junkyard Bruce' has since been restored by special effects artist Greg Nicotero (Scream, Bride of Re-Animator) and is displayed in the Academy for Motion Picture Arts in Los Angeles, kindly donated after the owner passed away.

Bruce makes his first appearance at night, marking his first victim: Chrissie Watkins (Susan Backlinie), a young female tourist. (Bruce doesn’t make ANY physical appearances until the film is part way through the second act, his presence mostly indicated in clever underwater shots and the use of symbolism ie. the infamous yellow barrels) Deputy Hendricks (Jeffrey Kramer) finds Chrissie’s remains on the beach, and calls it in. Chief Martin Brody (Roy Scheider) and the medical inspector conclude immediately that it was a shark, but this is later changed when the mayor dismissed it as a “boating accident.” in order to reduce panic on the run up to the 4th of July celebrations. Bruce returns again to the Amity Beach side killing Alex Kintner, a young boy, in the process. Ms. Kintner puts up an ad to kill the shark responsible, causing a shark hunting frenzy. When two men, Denherder and Charlie moor onto a nearby pier, they attach Charlie's wife's holiday roast on a hook, attach it onto the wooden dock and use it to catch the shark. When Bruce takes the bait, it rips apart the whole pier, taking it and Charlie out to sea with it. Charlie slides off the broken pier, causing the shark to turn back around and chase after him. Charlie swims back to shore, barely avoiding the shark. A couple of shark hunters claim to have caught Bruce but Matt Hooper (Richard Dreyfuss) , the ocean expert, has his doubts as the bite radius on the tiger shark caught were different than the ones on Ms. Watkins. A drunk Brody and Hooper cut open the tiger shark and find no human remains, causing them to look for Bruce on the water, since Bruce is a “Night feeder” claimed by Hooper. The two stumble upon Ben Gardner’s ruined boat and Hooper goes to the hull of the wreckage, finding a tooth from Bruce and Ben Gardner dead, dropping the tooth in the process. Hooper and Brody insist on closing the beaches, but the mayor denies their pleads and leaves the beaches open for the tourists. Bruce reappears in the estuary, (Bruce’s first true appearance), killing a man in a raft (Ted Grossman) and flees back into open sea. Brody hires Quint (Robert Shaw), a grizzled shark hunter, to assist them in killing Bruce with his boat the “Orca”. After a while at sea with nothing to show, Bruce reveals himself whilst Brody chums the water. Bruce circles around the Orca as the group gets ready to make attempts to kill him. Bruce is hit with a yellow flotation barrel in korder to tire him to the surface, however, he dives underwater for until the evening. Bruce returns again while the group is trading tales and drinking and rams the Orca, damaging it in the process. Quint and Hooper make attempts to repair the boat until later the next day when Bruce, finally, tires and resurfaces. Quint and Hooper grab the barrel attached to Bruce and in doing so Bruce resurfaces and Quints hand is cut by the rope in the process. The group gives chase to Bruce, hitting him with two barrels. Bruce is tied to the stern cleats of the Orca and is hit with another barrel. Bruce then uses his mass strength to tow the Orca as the three make attempts to tie him off. Bruce begins to eat his way up the line towards the boat and Quint makes to cut the rope, however, the cleats that had Bruce tied eventually give out and Bruce tries to go back underwater, though he is unsuccessful. Bruce resurfaces with the three barrels behind him, but this time manages to go under. Quint is surprised by this as no shark has ever done this in his years of shark hunting. Bruce hits the Orca after resurfacing again and follows them as they make an attempt to bring him to the shallows and drown him. Quint burns the bearings of the engine, leaving the group stuck in the same place. Quint questions Hooper on the possibilities of his shark cage and they agree to Hooper descending in an attempt to inject bruce in the mouth with poison. Hoopers attempt fails after Bruce attacks the cage and he drops the pole, but he manages to escape the cage. Bruce jumps on the boat and, in doing so, kills Quint after he slides down the broken deck and into his awaiting jaws, he is dragged underwater. Bruce makes attempts to eat Brody, first by entering the sunken cabin and Roaring, but only gets one of the oxygen tanks blasted into his mouth. The shark resurfaced, chewing on the tank but Brody swiftly shoots the tank, causing Bruce's face to explode, killing him. Hooper resurfaces and swims to Brody, the two look at the barrels left behind by Bruce’s body. The two use the barrels as a float and swim back to shore.

Due to limitations in design production at the time of filmmaking and some mistakes in depiction, the Great White Shark in Jaws is depicted in the attack posture of a Great White Shark. With its mouth wide open and pulled back while the mouth is not presented. It is cruising where the "nose" of the shark is no longer pulled back. This was not intentional in the design as clips of footage of actual great white sharks in the scene with Hooper in the cage, so the Bruce shark design was only designed to depict a great white shark with its mouth in attack posture, but not for when the shark is cruising. Also there were jowls depicted on the shark that was a design mistake as great white sharks do not have jowls, this was most likely to hide the machinery that operated his jaw.

Joe Alves designed the original concept using dehydrated shark specimens from museums and was told to go as big as possible. The frames were completed and then sent to Martha's Vineyard for final touches in what was termed "Shark city". Bob Mattey (20,000 Leagues Under the Sea) was charged with building the monster shark.

There were several versions of Bruce used in various shots, some designed to be towed behind a barge to simulate swimming and others for a mechanical platform and arm, usually only being complete on one side for hero shots. The arm and track were attached to the sea floor, however, it did once sink and had to be rescued.

Throughout the movie and as production carried on, Bruce had to be mended almost daily as he battled the salt water, including swift repaints by divers. You can see in some scenes torn rubber and loosening of the fin attachments as he took on more water. You may also notice when he dives underwater that some water erupts from his eye sockets - it was the only way to maintain pressure. His teeth also noticeably bend backwards when he had Quint in his grip.

Incidentally, the shark on the cover of the Jaws novel is based on a Mako shark, rather than a Great White.

In Jaws, Bruce was destroyed by a compressed air tank during a sea battle led by APD chief Brody, oceanographer Hooper, and Sea captain Quint. A hollow, static copy of 'Bruce' from the film was discovered in a junkyard years later, and is in essence a fourth 'Bruce' pulled from molds for the mechanical shark used in the production of the film. Serious fans of the film have christened this rare find as 'Junkyard Bruce'.

At a whopping 25 feet long, Bruce would have weighed 4.9 tons in real life, higher than Quint's estimation of 3 tons.

Bruce with a tank in his mouth. 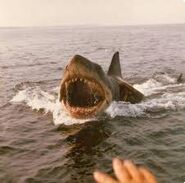 Brody trying to shoot the tank in Bruce's mouth.

Bruce a second before exploding.